Research underway at the Vancouver General Hospital Psychiatric Assessment Unit, in collaboration with UBC Department of Psychology, to develop a new scale looking at motivations for suicide.

Suicide is the 9th leading cause of death in Canada.  While a trauma or recent loss may precipitate a move towards suicide, the underlying motives that lead to suicidal thinking are often long-standing. Investigating how suicidal thoughts transition to an actual suicide attempt remains an elusive task.

Dr. Soma Ganesan, Medical Director, Psychiatry at the Vancouver General Hospital and the University of British Columbia Hospital, is co-leading a research team with Professor David Klonsky, UBC Department of Psychology, to develop a standardized, psychometrically sound assessment of suicidal motivations. Going beyond the conventional assessment of risk factors, the research study will examine the motivations, feelings, contextual triggers and other factors that prompt suicide attempts. The study will also identify the differences between instances of suicidal ideation that have and have not led to suicide attempts. 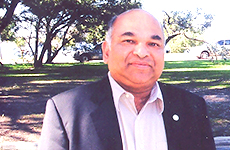 Although suicidal behaviour may appear to strike without warning, most people give definite warning signs of their suicidal intentions.

“We know very little about the underlying contributors and circumstances that instigate suicidal crises. This study allows us to better understand the transition from suicidal thinking to suicidal action” says Dr. Ganesan.

Social desirability also plays a significant role in suicidal ideation. There are surprisingly many misconceptions about suicide, both among the general public and among professionals. The study team will investigate how social desirability influences patients’ reporting on different aspects of their suicidal thoughts and behaviours. The study has clear clinical applications for suicide assessment and interventions, and will ultimately improve conceptual models of suicidal thoughts and behaviour.

Ask an Expert: Is sitting down on the job making you sick?