By mapping out the activity, physicians may be able to more accurately target the affected brain areas when treating a stroke.

Stroke patients often experience rapid loss of brain function due to an interruption of blood flow to the brain or the rupture of blood vessels in the brain. If not treated properly, stroke can cause permanent neurological damage, or even death. Researchers have been looking for ways to more precisely target this complex illness1.

According to Dr. Tim Murphy, researcher at the Brain Research Centre and professor at the Department of Psychiatry at UBC, spontaneous brain activity is not random. In fact, it follows a predictable pattern based on the brain’s hard wiring. 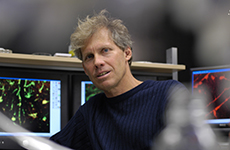 “We were able to make maps that could predict signal movement,” says Dr. Murphy. “We could pinpoint which areas of the brain would next be activated by following common ‘superhighways’ or pathways of signal movement during spontaneous brain activity.”

After further investigation, Dr. Murphy and his team found that when one part of the brain was stimulated other adjacent areas also became activated, even in the absence of direct stimulation. Additional adjacent brain areas were further triggered as a result of the stimulation. This is also the case for brains at anesthetized state.

“Understanding information processing pathways and patterns are important because this helps us with potential strategies to manage and treat problems if they occur,” says Dr. Murphy. “For instance, we might be able to predict which adjacent areas of the brain will be affected as a result of an initial stroke.”

This study sheds new light on treatment for stroke. Researchers are hopeful that the brain activity map will aid the development of a more targeted treatment or rehabilitation strategy for people who have had a stroke.

1Heart and Stroke Foundation, 2012.What is Stroke? http://www.heartandstroke.com/site/c.ikIQLcMWJtE/b.3483935/k.736A/Stroke__What_is_Stroke.htm
Share this article

The myths of arthritis and new ways to combat the disease

Distance is becoming less of a barrier to medical services