Not just a disease of the elderly 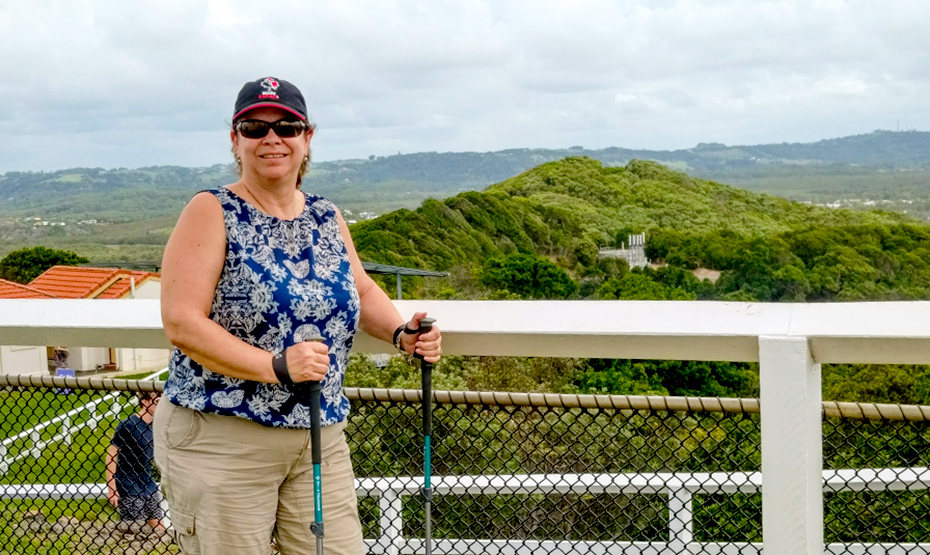 "I say yes to participating because I want to support other people with arthritis. The only way we can move forward with this disease is through research.”
– Trish Silvester-Lee, Surrey

Surrey resident Trish Silvester-Lee, a former ski racer and badminton player, has always loved being active. But when she was diagnosed with osteoarthritis in her 30s, Silvester-Lee had to redefine herself. “It was hard to be told that I had what I thought was an old person’s disease. The person I was as an athlete was a different person than I am now. She was highly driven and competitive. It’s very different to exercise as a person with a chronic disease.”

Now 57, Silvester-Lee recently took part in a pilot research project pairing a Fitbit with advice and biweekly phone coaching from a physiotherapist. The study aimed to help arthritis patients reap the benefits of a tracking device with personalized exercise goals that took their physical limitations into account.

“I had to relearn how to exercise. It’s a whole different mindset. Before, I would be mad at myself if I couldn’t do a big workout. I learned how to be kinder to myself. Instead of the old adage ‘no pain no gain,’ you learn to respect the pain, to respect your body and what it can do, not what it can’t do.”

Silvester-Lee first met with a physiotherapist to tailor an exercise plan. “They hear your story and brainstorm with you to make an action plan that works for you. Instead of doing a 30 minute walk, somedays I would break it down into three 10 minute walks during the day.” Silvester-Lee says setting more realistic targets and getting advice helped her stay motivated.

“People need that extra support—that phone call keeps you on the right track so you don’t beat yourself up for missing a day or two. It helps you not give up.”

Silvester-Lee, who works as a volunteer coordinator in a residential care facility, says the approaches she learned in the study help her every day. “Some nights I’m so tired it would be much easier to crash on the couch. But I know that if I don’t exercise, my body will actually feel worse. If I go and just do 10 minutes I feel extra energy.”

Silvester-Lee ended her participation in September 2017 but she still uses the Fitbit and the skills she learned.

“For me, it’s an ongoing battle. Keep moving or lose my range of motion. If I don’t exercise my joints will stiffen up. I could end up in a wheelchair.”

The study Silvester-Lee participated in was a pilot project for Vancouver Coastal Health Research Institute research scientist Dr. Linda Li and her team. Through the study, they confirmed the value of using a FitBit paired with counselling to improve active living. But they also found limitations. For example, the Fitbit sets minimum exercise levels, but no maximums. It also sets targets of moving every hour (breaking up sitting time) that don’t match with the ability of arthritis patients. The participants ended up moving more but not sitting less.

To resolve those issues, Li and her team, in partnership with scientists at Simon Fraser University and Arthritis Research Canada, designed a new web app called FitViz. FitViz is used in conjunction with the Fitbit but now physiotherapists can input maximum levels so patients don’t overdo exercise and cause a flare up of pain. They can also input rest periods and set limits for the duration of exercise. As a web-based app, the activity information can be accessed by both the physiotherapist and patient, resulting in better understanding for both.

“FitViz has more realistic information on how arthritis patients are doing, whether they are doing enough and whether they are doing too much.” Li says the more tailored approach should yield longer lasting results and more durable self-management. “Our hope is with better visuals and better counselling, we can build lasting skills once the program is over. Once they finish the study they can keep the Fitbit and continue to use FitViz.”

Silvester-Lee encourages anyone with osteoarthritis or inflammatory arthritis to participate in the new research studies. “It was no burden at all. It would be a real benefit to many people, especially those who are on disability or work part-time. These studies are a great way to access professional help.”

Find out more information about participating in this study.