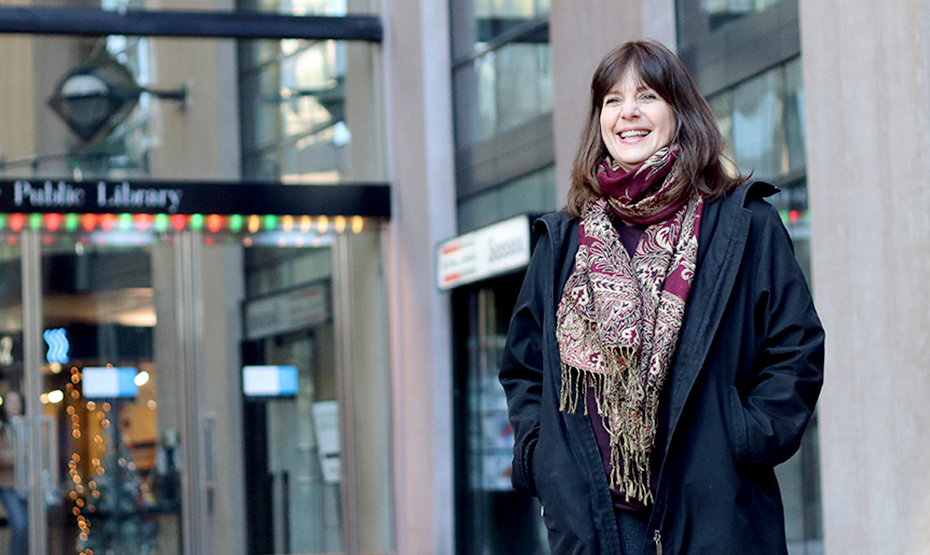 "I say yes to participating in research because I believe that my contribution is valuable to others.”
– Janet Uribe, Vancouver

On long-term disability leave, 54-year-old flight attendant Janet Uribe jokingly says she now volunteers as a ‘brain model’ at the Djavad Mowafaghian Centre for Brain Health, where she regularly takes part in clinical trials and studies. Diagnosed with Multiple Sclerosis (MS) 25 years ago, Uribe enjoys participating in research. “As a patient, who has lived with a chronic illness for so many years, it’s a great feeling to be able to contribute to this type of research. What they see in my brain will help others. It’s a privilege.”

“The study team is so devoted to research and finding new treatments. When I started as a patient here, it was a small place. Now we have our own beautiful building devoted to brain research. It’s amazing!"

One of the studies Uribe is involved with is a new research project that aims to map myelin levels in the brain. Myelin is the coating, or insulation, that surrounds the nerves in the brain and spinal cord. It enables communication between different areas of the brain. Neurological diseases like MS, as well as spinal cord injury, cause damage to myelin and break down the ability to process and coordinate language, movement and thought.

“It may mean nothing for me in the short term,” says Uribe. “But down the road this mapping study will help others. I’m very excited to be part of it.”

Vancouver Coastal Health Research Institute (VCHRI) scientist and study lead Dr. Shannon Kolind, shares that excitement as well as some local pride, because the myelin-specific magnetic resonance imaging (MRI) technology she’s using was pioneered at UBC. “It started slow, with just our centre being able to do this imaging and it taking 25 minutes just to image one slice. Now, we can image the whole brain in 10 minutes and the technique is used in 50 sites around the world. It’s an exciting time for medical imaging based research.”

MRI scanners use magnets and radio waves to create images of the organs in the body by picking up signals from water. In the case of myelin, which is wrapped around the nerve cells, the water molecules are tightly held between layers like the jam in a jellyroll. Because they are so tightly packed, myelin water has a very distinct look in an MRI scan, making it possible to measure the amount of myelin present.

Isolating and imaging myelin in the brain was the first step. The next step, which will be crucial to improving treatment, is to put the results in context. Kolind aims to accomplish that by comparing the brains of healthy control subjects with those who have a neurological condition. “Myelin levels vary a lot between regions of the brain and between individuals. Your age, education level, physical abilities, whether you’re right or left handed, can all affect myelin levels. By imaging similar categories of brains, we can establish what’s predictable and pick up on deviations.”

“We need people from all walks of life and all ages so we can compare those with similar backgrounds and build an atlas of understanding," says Dr. Kolind.

Kolind hopes to recruit a wide range of participants for her study, both men and women between the ages of 18 to 90 years old. She says taking part in the study is a great way for friends and family members of people with neurological conditions to be involved in research, get a sense of what patients go through and to play a role in improving treatment.

Advances in myelin-specific MRI imaging are very timely. “There are treatments coming down the pipeline that can target myelin repair. But to repair damage you need to detect it early—once the nerve is gone it can’t be replaced. If we can get a better picture of myelin levels, and know whether an individual's levels are within normal range, then we can detect damage earlier.” Kolind says knowing what normal levels look like will also help clinicians track whether drug therapies are effectively repairing myelin and allow them to make adjustments as needed.

Study participants of the brain mapping project are asked to take part in one clinic visit where they undergo an hour-long MRI test. As an added bonus, volunteers get to take home a DVD with the digital images of their brain.

“A better understanding of the brain helps everyone. Amazing things are going to happen because of people willing to do studies now. Just because you’re healthy today doesn’t mean you always will be," says Uribe. "Brain disease could impact someone in your family. If you have a healthy brain now and you can contribute to research, it’s totally awesome!”

Uribe says volunteering plays a valuable role in enhancing the lives of others and helps her focus on quality of life while living with MS. In addition to the research studies, she volunteers at her church and is involved with other “MS warriors” through The MS Gym, an online exercise and support group for people with MS.