Sleep apnea is under-investigated and under-diagnosed.

The health benefits gained from a good night’s sleep now include a reduced risk of injury on the job. A recently published study in Thorax comparing individuals with diagnosed sleep apnea and a control group who tested negative for the sleep disorder showed that individuals with untreated sleep apnea were twice as likely to get hurt at work.

“This is just another example of a health outcome that’s negatively associated with sleep apnea,” says lead author AJ Hirsch Allen, a PhD candidate in the Experimental Medicine Program in the Department of Medicine at the University of British Columbia.

The study, which looked at 1,236 patients who had been referred for treatment for sleep apnea at UBC’s Hospital Sleep Disorder Laboratory, is the only study of its size to use gold standard, objective criteria for identifying sleep apnea and workplace injuries.

“Relying on self-reporting can be quite inaccurate,” explains study co-author and Vancouver Coastal Health Research Institute scientist Dr. Najib Ayas. “We took our database of patients at the sleep clinic at UBC and we looked back to see how many of them had occupational injuries in the five years prior to when they presented for their sleep study.”

The researchers used polysomnography – a sleep study completed in their lab – to assess and diagnose sleep apnea and looked at claims databases from the Workers’ Compensation Board of BC to identify workplace injuries that their patients may have experienced.

Almost 10 per cent of people with sleep apnea had filed a claim reporting an injury, while only 5.4 per cent of those in the general workforce. 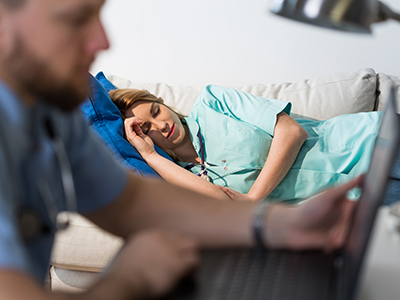 “Also, we believe that from an economic perspective, public funding to treat sleep apnea would be cost effective, given the expensive health consequences of untreated disease.”

Exacerbating the risk to workers and organizations is the 80 to 90 per cent of people with sleep apnea who are undiagnosed, estimates Hirsch Allen.

“Many people don’t think they have sleep apnea when they actually do, and more people need to be tested,” he says.

“Unfortunately, people aren’t that good at subjectively identifying if they’re sleepy because it becomes commonplace for them,” says Hirsch Allen.

“Studies have shown that people with acute sleep deprivation can accurately self-identify as sleepy, however, those with more chronic sleep deprivation have more difficulty identifying the degree to which they are cognitively and physically impaired,” he says. “Their objective performance, e.g. driving or working, decreases dramatically for a long period of time even though they may only feel like it decreases for the first few days.”

Hirsh Allen encourages partners, as well as family physicians, of individuals who may have the sleep disorder, to be pro-active in getting their partner or patient tested for sleep apnea.

“Sleep in general is a big topic right now,” he says. “We’re only just starting to understand the public health implications of sleep disorders and sleep apnea in particular.”