Canadians love their beef. In 2012, Canadians consumed an average of 44.1 lbs of beef per person yearly1. The greatest challenge to mass producing beef in order to meet this demand is Bovine Respiratory Disease Complex (BRDc) – a multi-factorial disease that accounts for 75% of the morbidity and more than 50% of the mortality in feedlot cattle and requires broad use of antibiotics.

A novel nitric oxide (NO)-releasing solution intranasal spray developed by Vancouver Coastal Health Research Institute scientist Dr. Chris Miller is presenting Canada’s beef cattle industry with the opportunity to continue mass production and reduce the prevalence of BRDc without the use of medication.

“The industry wants to move towards alternatives to antibiotics in preventing and treating BRDc and nitric oxide may be the answer – it’s the body’s first defense,” explains Dr. Miller, scientist at the Immunity and Infection Research Centre and Assistant Professor at the UBC Faculty of Medicine, Respiratory Division.

NO is a naturally occurring cellular molecule in most mammals, and possesses a wide variety of biochemical characteristics. Studies have shown it to be an effective antimicrobial agent against a broad range of microorganisms, including multi-drug resistant strains of bacteria and viruses. 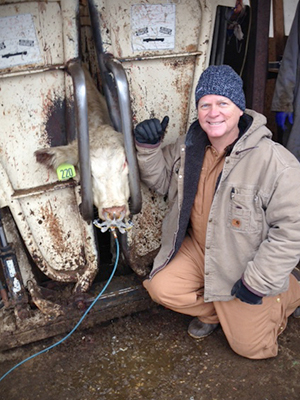 Dr. Miller has been researching NO since 1990 and wrote the first review article of NO in 1992. Through their company Bovicor Pharmatech Inc., Dr. Miller and the team have developed the first NO-nitrosylite as an intranasal NO-releasing spray called BovinexTM that can be administered in a few seconds to beef cattle during processing at the feedlot.

Their first study of BovinexTM given to beef cattle showed that, in comparison to a placebo, incidence of BRDc in cattle arriving in the feedlot was reduced from 72 per cent to 28 per cent. 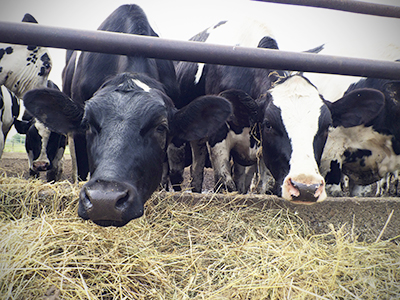 In fall of 2013, the team completed a study (in the process of being published in a peer review periodical) of 1,080 feedlot animals in in Alberta and found that the spray was as effective against BRDc as antibiotics. A subsequent study has also shown that the NO administered to the cattle leaves no residue or trace in the beef ready for consumption.

BovinexTM has been presented to the U.S. Food and Drug Administration and Health Canada and is going through the approval process to be the first NO-based therapy for prophylactic use in cattle.

“Our hope is that 90% of the animals will be antibiotic free,” says Dr. Miller. “My dream is to see this being used in all animals in B.C. This could give us ‘green’ antibiotic-free B.C. beef.”