Within the next 20 years, ovarian cancer rates in B.C. are projected to drop by as much as 40% thanks to a cancer prevention initiative developed by research group OVCARE. Their initiative has successfully changed B.C.’s gynecological surgery practices and is expected to reduce rates of the most lethal form of ovarian cancer among low-risk women in the province.

“Through our own research and analysis of studies worldwide, we discovered that high-grade serous cancer (of the ovaries) actually originates in the fallopian tubes at least three out of four times, and not on the surface of the ovaries as was originally thought,” says Dr. Dianne Miller, Vancouver Coastal Health Research Institute researcher, co-founder of OVCARE, and associate professor of obstetrics and gynecology at the University of British Columbia. “With this knowledge, and the knowledge that many women undergo pelvic surgery for benign disease, we hypothesized that taking out fallopian tubes at the time of these pelvic surgeries could prevent this deadly form of cancer.” 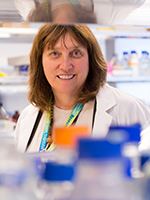 “In addition, we know that in our province one in five women who develop this deadly cancer may have a inherited predisposition which can be identified through genetic testing for the BRCA 1 and BRCA2 genes,” explains Dr. Miller. “Our second recommendation as part of the prevention program is to test women who develop this cancer to help identify families and risk and hence be able to offer risk-reducing options to this group.”

OVCARE was formed in 2011 as a consortium of clinicians and scientists wanting to do high quality, clinically relevant research on ovarian cancer. The group’s insights into the origins of high-grade serous cancer led to outreach efforts to all practicing gynecologists in B.C. over the course of one year.

OVCARE presented their findings and suggested that the removal of fallopian tubes during routine gynecological pelvic surgery, well within a gynecological surgeon’s skill set, could dramatically reduce a patient’s risk of high-grade serous cancer.

OVCARE’s paper, “Opportunistic salpingectomy: uptake, risks, and complications of a regional initiative for ovarian cancer prevention”, recently published in the American Journal of Obstetrics & Gynecology, details their efforts in changing gynecological surgical practices, as well as the resulting adoption of their recommendations across the province and an assessment of the surgery’s safety.

By the end of 2011, 15 months after OVCARE launched their initiative, B.C. saw 80% compliance among its gynecological surgeons to OVCARE’s suggested guidelines. Furthermore, as hypothesized, the surgery is not associated with any increase in surgical complications including bleeding, or longer hospital stays, or re-admission rates, and the procedure was not found to interfere with ovarian function, an important outcome for women’s overall health.

“Many women have pelvic surgery during their lifetime and approximately 30% to 40% of women will have an ovarian cyst removed, a hysterectomy, or a tubal ligation; each of those pelvic surgeries presents an opportunity to remove the fallopian tubes,” explains Dr. Miller. “For the individual woman, that could decrease her individual risk of getting high-grade serous ovarian cancer by approximately 75% to 80%.”

OVCARE’s recommendations have informed changes to the gynecological surgery paradigm in other provinces and among the Gynecologic Oncologists of America who issued a similar guideline in November of 2013.

“We’ll continue observing compliance in the province but it seems as though our surgeons have changed the way they do the surgery and this could be revolutionary –- we cannot find a chemotherapy drug that will give us the same benefit as prevention. If we can prevent 25% of these cancers, the benefits are enormous,” Dr. Miller says. “And a cancer prevented is clearly much better than a cancer treated.”