One out of every six to seven men will develop prostate cancer in his lifetime1. Of those prostate cancer patients, about 25 to 30 per cent will present late or have a recurrence that is typically indicative of metastatic advanced disease, meaning the cancer has spread throughout the body and is virtually incurable. Such difficult cases have propelled Vancouver Prostate Centre (VPC) scientists Dr. Artem Cherkasov and Dr. Paul Rennie to combine their expertise in an effort to find molecules that may one day address the problem of prostate cancer drug resistance and disease recurrence. Their breakthrough research has been validated by a license agreement with pharmaceutical company Roche.

Prostate cancer growth is dependent on the interaction of androgens (i.e. testosterone and dihydrotestosterone) with the androgen receptor (AR) – a nuclear receptor found within cells that, when activated, controls the biological effects of androgens. AR signalling is the main driver of most progressive prostate cancers.

“The scenario we see is a man whose cancer has reoccurred, who has been treated with conventional anti-hormone therapies, which then eventually fail, usually through mutations or through a variety of mechanisms,” explains Dr. Rennie, director of laboratory research at the VPC, which is a Vancouver Coastal Health Research Institute research centre. “Every other anti-androgen (receptor) drug binds to the exact same androgen-binding site – some drugs better than others through differences and properties, but when resistance arises in that region of the AR because it has mutated, they simply fail.”

Dr. Rennie and Dr. Cherkasov’s approach to the problem of drug resistance is unique in two key ways. First, the researchers targeted the location at which the AR actually binds to the DNA, and therefore the drug directly interferes with AR’s transcriptional function, unlike all previous anti-androgens binding to the androgen-binding site. Second, they were able to create a virtual model of the actual pocket in the DNA binding domain that has not been seen before. Having such a pocket allows them to attempt fitting chemicals into it. As a result, they are able to develop drugs with the potential to overcome resistance mechanisms seen with existing therapies.

“Our drugs target that DNA-binding domain site, which enables them to work even when the tumours have a form of the AR that’s now resistant to the conventional drugs,” says Dr. Rennie, who is also a professor in the Department of Urologic Sciences at the University of British Columbia.

“Our drugs target every potential form of AR that we’ve encountered.”

Dr. Cherkasov, a senior research scientist at the VPC and associate professor in the Department of Urologic Sciences at UBC, and his research team have developed a variety of mathematical modelling suites that enable them to model millions of potential small molecule structures to find those in virtual reality that may work against a particular target. 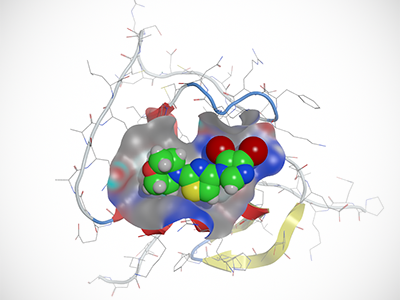 “We see where we’re going and then we develop very specific, precise, and accurate small molecules that will target the receptor in new ways, at new sites, and moreover, in the sites where the receptor is less likely to adapt to the attack,” says Dr. Cherkasov. “We have all kinds of approaches and computations to validate our predictions,” he adds. “And only when I’m very certain that the computer has given me a good answer, then we go out and make the potential drug.”

“We’re inventing new compounds that don’t even exist in nature. We bring them into existence in 3D virtual reality. We actually make them and test them and they work.”

“It’s one thing to bombard a field brutally; it’s another to have a satellite image and use guided missiles to do so. Our approach is the latter,” he says. “I provide this satellite guidance for missiles and Dr. Rennie provides the ground support for the war on cancer. Our working together is truly mutually propelling and it’s a real synergy – that’s why we’re so successful.”

The research team’s licensing deal with Roche will provide them with the expertise and resources to chemically modify, improve upon, and test their drug leads. Their access to the VPC’s world-class models and lab technology, in addition to high throughput screening technologies, gene reading, and the field of computational lab discovery created by Dr. Cherkasov, have together contributed to their successes thus far.

“We are successful because of all of these things combined,” he says. “The technology matured enough at every front to be able to deliver this.”