Key protein identified as cause of aggressive prostate cancer

Dr. Amina Zoubeidi, a research scientist at the Vancouver Coastal Health Research Institute and an associate professor in the Department of Urologic Sciences at UBC, says the discovery of the protein driving the emergence of NEPC is a timely and important one. As more prostate cancer patients are treated with anti-androgen drugs, the number of cases of NEPC is growing.

We estimate between 12 to 20 per cent of patients treated with second line androgen deprivation therapy go on to develop NEPC. These are significant numbers. Up until now we weren’t able to answer why these cells were becoming so aggressive in some patients. Now we have an answer.

Dr. Zoubeidi and her team of researchers made the discovery using a two-step process. They first designed a lab model using mice to mimic the growth of NEPC. This model helped them identify a key protein called BRN2 that was essential for NEPC to develop. The researchers then went on to study human tissue samples from patients with NEPC. They found that BRN2 was also highly expressed in those samples.

Dr. Zoubeidi says the team then used new genome editing CRISPR technology, to turn off the BRN2 gene. When they did so, they prevented the emergence of NEPC.

The BRN2 discovery has been published in the journal Cancer Discovery and has been highlighted in Nature Reviews Urology. 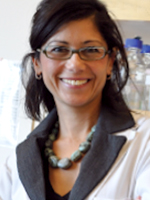 Dr. Zoubeidi says researchers at VPC are wasting no time in moving to the next step, and acting on their findings. They are already working to develop an inhibitor drug that could turn off BRN2 in prostate cancer patients and block the growth of NECP.

“Prostate cancer is a leading cause of death for men in Canada and worldwide. At VPC, we are not only able to identify the cause of this aggressive type of prostate cancer but we are already hard at work to find a drug to block it. We’re working fast because we are committed to improving outcomes for patients. I feel confident that we will make more breakthroughs,” says Dr. Zoubeidi.