Speeding up the recovery time of a common runners’ injury

“I say yes to participating in research because people doing research are very committed to you as a person and they listen. Believe them and give yourself the opportunity to avail of their expertise.”

British Columbia’s Lower Mainland is a veritable outdoor playground for weekend warriors like 55-year-old runner Sibeal Foyle. However, as the West Vancouver resident discovered, despite being invigorating, routine physical activity can also cause physical pain. Foyle had been experiencing noticeable discomfort in her Achilles tendon on and off for a few years, but while she was training for the 2011 Vancouver marathon, she was completing an 18-mile training run and had to stop because the pain in both of her Achilles became unbearable.

Foyle had developed Achilles tendinopathy (AT)–a structural breakdown of the tendon in the middle of the Achilles–and got caught in a vicious cycle of pain, physiotherapy and recovery, returning to running, and feeling pain again.

“If I was feeling good, I’d go all out, and then I wouldn’t be able to do anything for a while,” says Foyle, a fine arts instructor at Kwantlen Polytechnic University. “It got to the point where I could hardly walk at all, I was wearing flats all the time, and the pain was so bad I thought, ‘This is crazy–I can’t go on like this.’”

Physiotherapist Lyndal Solomons often sees AT patients caught in a loop of pain and recovery.

“They experience pain, so they stop running or hiking and rest it for a few weeks and then they go back and it happens again,” says Solomons, who works at the Allan McGavin Sports Medicine Centre at the University of British Columbia.

“We know through the research that physiotherapy rehabilitation is the best thing you can possibly do for AT, but it’s still an extremely slow process and it takes a long time to heal,” says Solomons.

“Even though we’ve got a fairly reliable way of fixing the problem, it’s slow and people are always looking for ways to speed up the process,” explains Solonmons.

Solomons is co-investigator, alongside principal investigator and Vancouver Coastal Health Research Institute scientist Dr. Alex Scott, for a study looking at adding intramuscular stimulation (IMS) to a standard AT treatment program to accelerate the long process of recovery. IMS is the insertion of solid acupuncture-like needles into affected tissues to try and get the muscle to relax and take the tension off the tendon.

In Solomons’ and Dr. Scott’s study, IMS treatment is given alongside standard AT rehabilitation to half of the study participants. The other half of the participants receive the standard rehab program, which may involve the patient first backing off from the aggravating activity, while physiotherapy then aims to build up muscle strength, especially in the in the calf muscles, through a routine of specific exercises. Slowly, the affected tendon is progressively reloaded.

Both treatment options are intended to return the tendon to full function and also offer the benefit of ultrasound scans to see the quality of the tendon at 12 weeks, six months, and one year after initiating therapy.

While Foyle was part of the IMS group, Mahmoud Ahamed, another 55-year old runner and triathlete from the North Shore, was part of the control group that went through the standard therapy program of rehabilitative exercises without the added IMS.

Ahamed, a real estate agent, knew that something was very wrong with his Achilles tendon when he had to stop running during a half-marathon because of the pain.

“I had to walk; I hobbled along and couldn’t finish,” he says, disappointed. “I didn’t even get halfway. I didn’t realize what I’d done to myself physically.”

Ahamed appreciated that by participating in the study, he received not only physiotherapy but also free scans of his Achilles.

“There was the education too,” he adds. “I didn’t realize it’s the calves that support the Achilles, so if your calves are weak, then the whole system breaks down. It’s pretty basic but you don’t think about those things.”

By participating in the study, both Foyle and Ahamed have made full recoveries from AT. And both have returned to their passion–running.

“I want to be a trail runner and an endurance runner–I love being out there,” shares Foyle.

And Ahamed took part in a half-marathon this year. 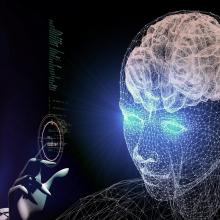 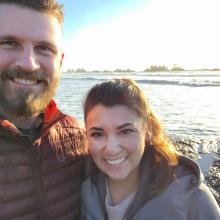 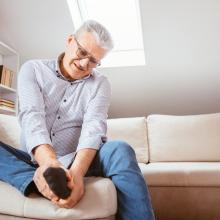