Researchers found that physical activity was associated with better brain health among seniors irrespective of their sedentary time.

Older Canadians tend to spend more time sitting than any other age group, which can impact both their physical and mental health. Despite this, researchers have discovered that seniors who are more physically active were less likely to have the characteristic thinning of the cerebral cortex that often goes hand-in-hand with cognitive decline.

“People are beginning to view sitting as the new smoking,” says study lead author Dr. Ryan Falck, a postdoctoral fellow in the Aging, Mobility and Cognitive Neuroscience Laboratory at the University of British Columbia (UBC). “Our findings suggest that, even if you are mostly sedentary, being physically active can help to reduce the negative consequences of sedentary behaviour on brain health.”

“To maintain good brain health, our study suggests that rather than being concerned about how much you sit, focus on moving more.”

The areas of the brain most linked to cognitive decline are the frontal and temporal lobes. The frontal lobe is associated with higher-level executive functions that enable us to complete complex tasks, such as balancing a checkbook or taking a phone call and making notes simultaneously. The temporal lobe houses the hippocampus, which is where much of our memory formation occurs.

The thinner the neural tissue of the brain gets, the more prone individuals are to developing cognitive decline and neurological disorders, such as dementia and Alzheimer’s disease, explains Falck.

“As we get older, our cortical thickness tends to atrophy, but this only becomes problematic in some individuals for a variety of reasons.”

Falck and study principal investigator and Vancouver Coastal Health Research Institute researcher Dr. Teresa Liu-Ambrose found that higher amounts of physical activity were associated with cortical thickness of the superior frontal gyrus and temporal lobe. This was true even though all participants in this study—both more and less active—spent above 10 hours per day being sedentary on average.

“We believe this points to a potential link between physical activity and improved cognitive outcomes for seniors, regardless of whether or not they are sedentary most of their waking hours,” says Liu-Ambrose.

One of the reasons researchers believe physical activity and exercise has this protective effect on the brain is because it helps maintain glycemic control, or our body’s natural balance of blood sugars. Poor glycemic control leads to a buildup of glucose in the bloodstream, which can make individuals more prone to cortical atrophy and cognitive decline.

“Think of your brain as a shipping department receiving packages, i.e., sugars,” analogizes Falck. “The more packages received, the less room there is for more to arrive, which can gum up the works. Exercise improves the flow of packages traveling in and out, which helps keep everything running smoothly.” 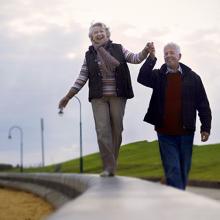