As B.C. moves toward decriminalizing the possession of small amounts of some illicit drugs, a new study calls for more harm reduction supports for mothers.

“The only reason I’m even using heroin is because [being separated from my kids] became so stressful that it was unbearable,” says a 34-year-old mother who participated in a recent study led by Vancouver Coastal Health Research Institute researcher Dr. Jade Boyd.

“I was in so much pain. There wasn’t a second during the day when I didn’t feel completely... overwhelmed with grief.”

Her words were echoed by many of the other participants in Boyd’s research, published in the American Journal of Public Health, and they illustrate the complex narrative of drug usage and motherhood in Greater Vancouver.

Boyd and her team conducted 45- to 60-minute, semi-structured interviews with 40 mothers who used illicit opioids or stimulants. After reviewing and analyzing the transcripts, the research team identified several themes that emerged from these conversations.

“Hearing directly from people with lived experience is critical in thinking about the way forward and selecting appropriate health care and social practices.”

None of the participants lived with their children when they were interviewed, and all reported experiencing severe socioeconomic marginalization, including homelessness, housing instability, poverty and/or a history of incarceration and/or foster care.

“Instead of tearing families apart, we should be focused on providing supports that keep families together.”

Many of the women interviewed also cited the pain and loss caused by structural violence as a catalyst for using drugs. Structural violence can take the form of institutional stigmatization and discrimination against mothers who use drugs. This can feed into actions, such as the removal of children by child protective services.

“Our drug laws penalize people who use drugs and create an environment of discrimination,” says Boyd, who has worked with people who use illicit drugs for over 10 years.

“When we couple that with the entrenchment of gendered and racialized violence in Canada, women — especially poor, black, Indigenous and other racialized women and non-binary individuals — are more vulnerable to violence from others and the state. Punitive drug laws also perpetuate the stigmatization of drug use.”

Fentanyl and fentanyl analogs were detected in 25 per cent of illicit drug deaths in 2014 and 86 per cent in BC in 2021. As a way to reduce harm and the marginalization of drug users, the BC Government is undertaking a three-year decriminalization exemption for the possession of 2.5 grams or less of certain illicit drugs for personal use, scheduled to take effect in January 2023.

While Boyd believes decriminalization could help remove some of the stigma and barriers to treatment and harm reduction supports, she sees this only as a first step.

“Decriminalization is not enough on its own because we also need to provide non-punitive or less regulated safe supply or access to non-toxic drugs,” she says. “Otherwise, some people may hesitate or be too afraid to access health and overdose prevention services.”

Women who use drugs, as well as all women, are more likely to experience social and intimate partner violence, which can affect their health, risk of overdosing and ability to access overdose prevention interventions, says Boyd.

Women are also more likely to be single parents, which opens them up to greater scrutiny than the fathers of their children. This can place a heavy load on their shoulders that harm reduction supports can help relieve, Boyd explains.

“Ultimately, I think that we need to move away from the notion that if a woman uses substances it puts her family at risk, because that is not necessarily true,” she says. “It is imperative that we think differently about mothers who use drugs, and consult and collaborate with them on the best ways to support them.” 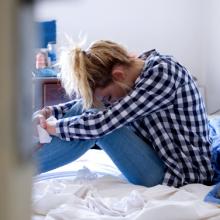 Shaking the gendered stigma of HPV

BC Centre on Substance Use