Kidney stones are a common problem in Canada. Ten per cent of the population suffers from the painful condition, caused when high levels of oxalate combine with calcium in the bloodstream and crystallize into stones in the kidney. Oxalates are found in a range of foods from french fries to nuts. Some people easily eliminate oxalates but others can’t.

In a new BC study of live-in partners—one partner who has recurring kidney stones, the other stone free—Vancouver Coastal Health Research Institute scientists found that differences in gut bacteria may account for the difference in kidney stone occurrence.

Dr. Dirk Lange leads the ongoing project, which has already studied 17 partners sharing similar diets and daily habits. Lange says zeroing in on the intestinal microbiome—the collection of bacteria, fungi and viruses that live in our guts—makes sense. “There is evidence that a single type of gut bacteria called 'Oxalobacter formigenes' breaks down the oxalates we ingest. It only uses oxalates for energy. Without that bacteria we have a hard time breaking down oxalates and they may go on to form kidney stones.”

As a microbiologist, I know that our microbiome consists of thousands and thousands of species that all live symbiotically. I felt a single bacterial species can’t be working alone; they are all interconnected.

Lange started to look for networks, or enzymatic pathways. He found them. “We dug a little deeper and discovered that a few enzymes are less abundant in recurrent stone formers—the enzymes involved in butyrate metabolism. No one else has linked this to kidney stone disease.”

Butyrate is a short-chain fatty acid produced by bacteria. It feeds the cells that line and protect the gut.  A lack of butyrate is associated with what’s called a leaky intestine—one that allows compounds like oxalate to be reabsorbed into the blood stream, and travel to the kidney.

From desert rat to coastal human

The power of networking played out in real life when Lange met another researcher with an oxalate connection at a conference. Aaron Miller, a microbial ecologist, was studying the desert wood rat of Utah, a rodent that eats a particular type of cactus very high in oxalates. “These rats have a specialized gut that can break down high levels of oxalates. Miller tracked changes in their microbiome as they digested increasing amounts of oxalate and identified a network of oxalate-degrading bacteria.”

Lange suggested the two team up and compare their microbiome samples. They quickly established that a similar network found in the wood rats existed in his human samples. It was a significant breakthrough.

Lange cautions that knowing more about which bacteria deter kidney stones doesn’t mean a cure is as easy as taking a specialized pro-biotic pill. “I wish it were that simple. You would have to continuously take them because essentially you’re putting something into an environment it didn’t survive in to begin with. The bacteria would die within 24-48 hours.” Like trying to grow a desert cactus in the rain forest, the bacteria need the right conditions to survive.

The million-dollar question, says Lange, is how to change the complex gut environment to enable oxalate-degrading bacteria to thrive. He says there may be other networks working in tandem with the oxalate-degrading ones. Lange plans to investigate diets that might maintain these networks. Meanwhile, Lange and his colleague Dr. Ben Chew are still recruiting participants for the kidney stone partner study.  The more microbiomes they can compare, the closer they’ll get to understanding the disease.

Protection for kidney transplant health in the palm of your hand 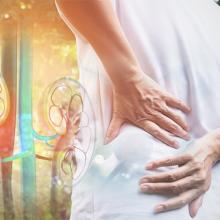 Ask an expert: How do I keep my hard-working kidneys healthy? 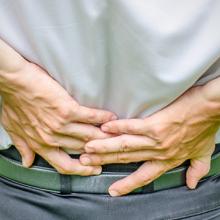