Scratching the surface to protect against microorganisms

Copper can help reduce the spread of disease, and new research shows which varieties are more effective.

Countless people move through hospitals, touching and spreading microorganisms to multiple surfaces each day. Copper’s natural antimicrobial properties can help combat the spread of diseases such as COVID-19 and Methicillin-resistant Staphylococcus aureus (MRSA), and new research identifies which combination of copper alloys and cleaning practices pack the best microbe-destroying punch.

The study, led by Vancouver Coastal Health Research Institute researcher, Dr. Elizabeth Bryce, and her research team tested the antimicrobial efficacy of solid copper (integral), spray-on copper and copper-impregnated surfaces over time. These results were compared with a control surface of stainless steel, which has no innate antimicrobial properties.

Researchers worked with the UBC Materials Engineering Department and medical microbiologists from Vancouver General Hospital to simulate one year of cleaning action and cleansers on the surfaces using a Wiperator machine.

After the simulation, the surfaces were disinfected and exposed to two bacteria known for having antibiotic-resistant variants commonly found on hospital surfaces. Staphylococcus aureus (SA) bacteria often cause skin infections and can lead to pneumonia or toxic shock syndrome1.  Pseudomonas aeruginosa (PA) can lead to pneumonia, as well as infections in the blood and other parts of the body2.

Bryce and her team found that integral and spray-on copper surfaces did a better job than copper-impregnated surfaces and the control surface at killing PA bacteria—a gram-negative organism with a thinner cell wall than SA. None of the copper alloys were able to meet sanitization requirements for SA, although integral copper outperformed the other three alloys when it came to cutting down the bacteria’s numbers.

Research could guide decision-making on copper surfaces in hospitals

“Most Canadian hospitals do not currently have a broad use of copper surfaces to protect against the spread of microorganisms.”

“Because of the costs associated with installing copper surfaces, it is important to accurately determine their effectiveness, including the impact of common cleaning practices,” says Bryce.

Her study found that spray-on copper’s effectiveness against SA increased slightly when combined with quaternary ammonium cleansers. However, bleach reduced the efficacy of all test alloys over time.

Bryce notes that the study’s results show that copper could be a complement to regular cleaning protocols, not a replacement. And because copper has multiple mechanisms to kill bacteria, it is unlikely that bacteria exposed to it on a regular basis would develop copper resistance.

“Copper will likely be most beneficial on high contact surfaces in hospitals, such as door handles, bed railings and counters.”

“Copper punches holes in membranes, interferes with key enzymes, affects the transport of chemicals into the cell and activates superoxide radicals, among other things that kill bacteria,” notes Bryce. “This helps it evade antibacterial resistance better than many antibiotics.” 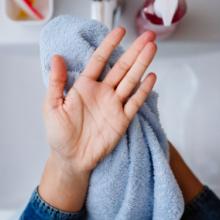 Ask an expert: My hands are dry and cracked from washing them so often. How can I get my skin back to normal? 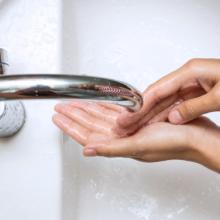 Ask an expert: Why is it anyone’s business whether I wash my hands or not?