Men with glaucoma more likely to have erectile dysfunction

B.C. studies show glaucoma medications not at fault for higher risk of impotence.

A new study shows men with glaucoma are two and a half times more likely to have erectile dysfunction (ED) than men without the eye disease. The link between the two conditions has been firmly established by Vancouver Coastal Health Research Institute research scientist Dr. Frederick S. Mikelberg. Using population data and a clinical study, Dr. Mikelberg followed up on a Taiwanese study that first linked erectile dysfunction to glaucoma. Dr. Mikelberg and his colleagues were curious to see if they could find a reason for the correlation.

“We thought it was going to be related to the eye drops given to glaucoma patients, but we found that it wasn’t. That was a surprise.” Dr. Mikelberg says this is good news for men with glaucoma who might have been hesitant to use medication if it was possibly causing ED.

But if glaucoma medication isn’t causing ED then what is the relation between the two conditions? Dr. Mikelberg says the strongest theory now is a vascular one.

“Glaucoma has a link to vascular factors and ED is a vascular problem. So our hypothesis is they both have that potentially common factor.” 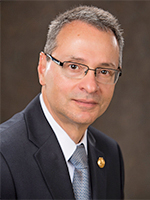 Dr. Mikelberg cautions against jumping to conclusions about prevention knowing that there is a vascular link. He says when people hear vascular they often think about things like high blood pressure and clogged arteries, which can be improved with diet and lifestyle factors like exercise. But these factors are not related to glaucoma.

“In fact, in glaucoma, lifestyle changes like these seem to have no impact,” says Dr. Mikelberg.

“We are talking instead about blood flow issues. Another interesting and strong correlation to glaucoma is presence of migraines. And migraine headaches are a vascular disease often caused by vascular spasms or vasospasms – constrictions of the arteries. A migraine is a special kind of vascular headache. Blood vessels constrict and decrease blood flow to parts of brain. This mechanism may occur in glaucoma and in ED.”

Dr. Mikelberg says the only lifestyle change that may make a difference for both diseases is not smoking, since smoking is known to constrict blood flow.

Glaucoma is a silent disease in the early stages – 50 per cent of people don’t even know they have it. But with early detection and treatment most people will have normal vision for the rest of their lives. Again, Dr. Mikelberg hesitates to say his findings should prompt dramatic changes in treatment. He says there is not enough in the studies to date to say that ED patients will get glaucoma. And researchers can’t pinpoint if one condition starts before the other.

“Suggesting that everyone with ED should have an eye test right away, honestly that’s a stretch. It’s not that strong a predictive factor. Let’s just say it’s a curiosity, an interesting correlation, one that makes you think more openly about the two diseases.” Dr. Mikelberg says he’s keen to see what future research may uncover.

Ask an Expert: My parents’ eyesight is getting blurrier as they get older—could it be age-related macular degeneration?

Blazing a trail to improve the lives of prostate cancer patients